“America: Imagine The World Without Her” 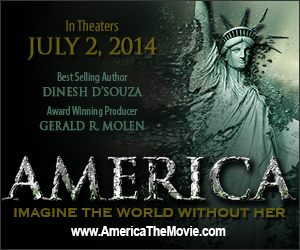 Last night, Trevor and I were privileged to attend a preview showing of Dinesh D’Souza’s new movie, America: Imagine The World Without Her. The movie will be released in the Atlanta and Houston markets this coming weekend (June 27), and then nationwide on July 2. I could really sum up the movie with a resounding “WOW,” but I realize that you’ll need a little more to go on than that. 🙂

Dinesh and some of the other producers and writers were there for the showing last night, and they gave us some background information and details about the movie. We purchased D’Souza’s new book (by the same title), gave him a copy of our book, and were able to talk with him a little.

Trevor and Michelle with Dinesh D’Souza

If any of you saw D’Souza’s movie 2016, you know what caliber film he makes. 2016 was the 2nd most popular political film of all time. I would say that America… is even better.

The movie addresses several points that progressives are pushing on the nation—false narratives that paint America as a greedy, evil empire bent on conquest and willing to use and abuse anyone who stands in our way. It shows how this “shame on America” mindset has been perpetuated in large part by historian Howard Zinn and his warped presentation of the history of America (Zinn’s book, A People’s History of the United States, is required reading in most colleges and universities and in many high schools and was even plugged by Matt Damon in his movie, Good Will Hunting. It’s been “out there” in a big way for decades, and it’s doing untold damage to our young people and ultimately the nation.).

The movie goes on to reveal that both Obama and Hillary were mentored by radical socialist Saul Alinksy and details their agenda to re-make America by destroying capitalism (with crushing regulations and taxes), creating a discontented lower class that blames the “rich” for their troubles, and ushering in socialism (with massive national debt and government takeovers of healthcare, banking, business, and so on). In their agenda, the successful entreprenuers are painted as evil and greedy and in need of punishment (never mind that those entrepreneurs started at the bottom and worked their way up, in the process creating jobs for the rest of us AND we became the greatest and most powerful nation on earth because of such entrepreneurs).

Their agenda is working, isn’t it?

After debunking the false narratives about America, the movie reinforces the notions that most of us grew up believing about this country: we are a force for good around the world; we are the most generous nation on earth; we help people and countries in need; we are defenders of the weak; we spend millions to rebuild nations after war, and so on.

My words can’t do this movie justice. I urge you to take a moment to watch the movie trailer here, and then make a point to go see it in the theater when it opens July 2 (or this weekend, if you’re in the Atlanta or Houston markets). What happens opening weekend will determine how many theaters the movie ultimately lands in, and a huge turnout can send a powerful message to progressives who intend to destroy America as we know it.

If you’ve already caught onto the move that’s underfoot to “re-make” America, this movie will strengthen your resolve to stand up against it. If you are just starting to learn about what’s going on behind the scenes, this movie will open your eyes and ignite a fire in you to defend and preserve this amazing nation before it’s too late.

This entry was posted in Media and tagged America, America: Imagine the World Without Her, Christianity, God, history, United States of America. Bookmark the permalink.

2 Responses to “America: Imagine The World Without Her”