My “Crash” Course in Grief

Posted on September 4, 2015 by Kingdom Crossing

It’s been four months today since my dad was killed in a hit-and-run crash. He was cycling near his home on May 4 and was hit from behind by an intoxicated motorist (who was later apprehended). Dad was killed instantly. As I wrote a month after the crash, my dad was my rock, and our whole family is trying to pick up the pieces of our lives and figure out how to go on without him.

In the days and weeks after Dad was killed, I wondered if there would ever come a time when I didn’t think about him every waking moment of every day. My friend, whose father was killed in a mining accident years ago, assured me that the day would come when I wouldn’t dwell on his death each moment. Thankfully, she was right, and I’m at least able to function now.

These four months have been, hands down, the hardest of my entire life. I’ve cried daily for four months straight. I try to keep the tears inside until I’m alone at night…often in the shower. There the tears can flow and I can pour out my hurts and heartache to God without upsetting anyone else. Sometimes, out of the blue it hits me that Dad is really gone, and it feels like I’ve been punched in the stomach. At this point, I don’t know when the tears might stop.

I want to discuss some of the things that I’ve learned about grief in these four shorts months that I’ve been on this road….the good, the bad, and the ugly. And believe me, parts of it are ugly.  The “experts” say that there are stages of grief, such as denial, anger, bargaining, depression, and acceptance. I can’t point to specific stages that I’ve been through; maybe that will come in time. I just know that it hurts. And it’s messy. And I’ve run the gamut of emotions from one day to another or even from one moment to another.

As my mom and I were sitting by Dad’s fresh grave one day, an older lady stopped by the cemetery to put flowers on a grave that I assume belonged to her husband. Her less than comforting words were this, “Honey, it doesn’t ever get any easier.”

But what about “Time heals all wounds?”

“Tears may remain for a night, but joy comes in the morning?”

“A time to grieve and a time to dance.”?

Where’s the hope that this pain won’t last forever?

Elisabeth Kubler-Ross and David Kessler have this to say: “You will not ‘get over’ the loss of a loved one; you will learn to live with it. You will heal and you will rebuild yourself around the loss you have suffered. You will be whole again but you will never be the same. Nor should you be the same, nor would you want to.”

Going back to our homeschool academy last month was almost torturous for me. Dad was one of our middle school teachers, and I’m the school administrator. I spent well over 600 hours with Dad at school in the past year alone. When I’m there I can almost hear his voice coming from his classroom across the hall from my office. I can almost see him walking down the hall in his slow, confident gait. I can almost smell his cologne on my children’s clothes, because they would greet him with a hug each morning at the beginning of school. Thankfully, I had the summer to work through some of the emotions, and I try to put on my “happy face” every day at school, but it’s still very difficult even to look in his classroom.

Another really stinky aspect of this has been imagining the actual crash in my mind. I know enough details from visiting the scene of the crash and from speaking with the state patrol officer and some of the witnesses to know that my dad died a terribly violent death. I know that I shouldn’t dwell on such things, but it’s very hard to keep my mind from going there. When I sink into that awful train of thought, I have to pull myself out of it quickly by thinking about other things. It’s been helpful to have my kids around, because they keep things upbeat and are a distraction when I’m tempted to sink into the mire of the tragedy.

Anger has been a prominent feeling for me over the last few months. I wouldn’t say that I’m stuck in the anger “phase” of grief, but I experience angry moments off and on, out of the blue, for no apparent reason. I’ve screamed at God for taking my dad away. I’ve screamed at the man who killed him (well, not really “at” him because I’ve never spoken to him, but in the privacy of my home). I’ve been mad at Dad for riding on a busy road. I’ve been less than patient with my children at times, because it’s been hard to keep the anger from flowing out. I’ve had little patience with senseless quarrels and the insignificant squabbles of others. It’s as if I’ve crossed over a line. I can see now what’s truly important in life, and I don’t want to spend my time and energy on trivial issues that have no eternal value.

I’ve been reading a book called Forgiving the Unforgivable. The author lost his father, grandmother, and great-grandmother to a drunk driver about 20 years ago, and he discusses the process of forgiving someone for something that caused so much pain. He says that it took him a long time (years) to come to the place where he could forgive the driver. In fact, for some time, he wanted the driver to die for what he had done.

To say that I’ve forgiven the driver who killed my dad would be true and false. When he comes to mind, I have to make a conscious choice to forgive him, over and over again. I think it’s a process that we have to go through, of releasing the perpetrator in our minds and praying for him or her until we finally feel no ill will toward the person. I do pray for the man who killed Dad–I pray for him often. I pray that he will come to know the Lord through this tragedy. If this makes any sense, I don’t want my dad’s death to be wasted; I want Dad’s life and death to lead his killer to Christ. I know without a shadow of a doubt that if Dad had been given the choice to die so that his killer would gain eternal life, he would’ve willingly given his life. (Who knows? Maybe Dad was given that choice in the instant before he was killed.) Wouldn’t that be how God operates? To use something absolutely horrific to bring about something eternally awesome?!

Our family still has a long road ahead of us. We’ve already been through one hearing with the driver, and another is scheduled for December. He hasn’t even been indicted for the crash yet, so the trial is still many months away. We will likely re-live the tragedy and loss over and over again through the legal process.

But here are some positives:

One thing that I’ve experienced since Dad’s death is a loss of fear. I’m no longer afraid of death and dying because my daddy has gone before me. It’s comforting to know that He is in heaven holding the babies that my sister and I miscarried until we get there and can hold them ourselves. He was an awesome Papa to his 11 grandkids here on earth, and he’s being an awesome Papa now to the three who are with him in heaven.

Another positive is that I’ve lost some of my shyness about talking to others concerning matters of faith. I’ve always been very reserved and almost afraid to talk to strangers, for fear of sounding dumb or coming across as odd. Since Dad’s death, I have a new boldness and a desire to share with others what’s truly important in life: a relationship with Jesus.

I often wonder if it’s harder to lose a loved one instantly and tragically as we have or slowly and painfully, from a disease. I think to myself that I would give my right arm to be able to tell my dad goodbye, to give him one last hug and tell him how very much I love him. But if I had had to watch my big, strong, wise daddy waste away from a horrible disease or injury, I don’t think I could have endured it. Even in tragedy, God is merciful and kind.

I’ve prayed for Jesus to come back for His church many, many times since May 4. I’m ready to leave this earth; I’m ready for the pain and heartache to end. I wouldn’t say that I’ve been “depressed,” but I’ve had a desire to die since my dad was killed. In fact, several in our family have expressed these feelings, including some of our small children. Of course, I’m not thinking of killing myself, but I would be very happy for God to take me from this world at any time now. My husband thinks I’m nuts and tells me that I’m being selfish and that he and our children would be devastated. That’s true, I suppose, and I wouldn’t wish that pain on them for anything….I just want to be with my daddy again, and I’m tired of hurting. I can’t imagine living 40 or 50 more years on this earth without him. I don’t see how I possibly can.

And then, there’s this: “I can do all things through Christ who gives me strength.” Philippians 4:13.

Do you see that?

I can because He gives.

My aunt sent me a devotional today that gave me peace and increased my longing to be Home. Here’s an excerpt: “Think about the comfortable feeling you have as you open your front door [after a long trip]. That’s but a hint of what we’ll feel some day on arriving at the place our Father has lovingly and personally prepared for us in heaven. We will finally–and permanently–be ‘at home’ in a way that defies description.” (Charles Stanley/In Touch Ministries)

This world is not our Home. We are merely passing through. We are aliens and strangers on this earth. But our journey here needs to mean something. We have Kingdom work to do on our way through this life, and I believe that Jesus won’t be back for His church until we’ve finished the work He has given us. Life is hard. In fact, it stinks sometimes. But God is good. He is faithful. He loves us. And He’s coming for us soon.

In the words of Matt Maher…..

Because He lives, I can face tomorrow.

Because He lives, every fear is gone.

I know He holds my life, my future in His hands. 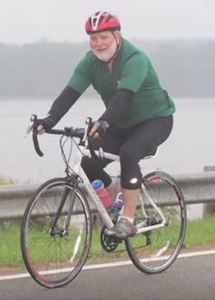 Click here to see a glimpse of my dad’s beautiful life.

Check out my brand new book, Through Deep Waters: Finding Healing and Hope in Devastating Grief. 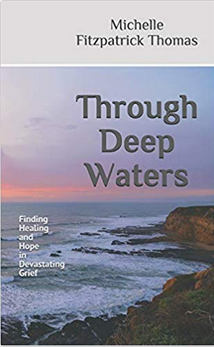 8 Responses to My “Crash” Course in Grief