What Motherhood Has Done to Me

Posted on February 28, 2014 by Kingdom Crossing 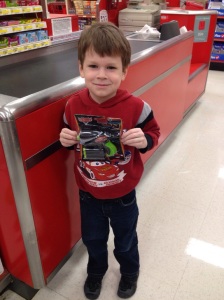 When I was in the shower tonight, I had some thoughts about the ways that I’ve changed since becoming a mother. I seem to get a lot of inspiration while in the shower. Is anyone with me on that? Not with me, literally, but do you feel inspired while bathing? Maybe it’s because it’s the ONLY quiet, alone time in my day, or maybe the steam clears my head. Regardless, I probably need to install a marker board in there to jot down my thoughts so I won’t lose them as soon as I step out.

Well, tonight I was pondering some of the many ways that I’ve changed since producing my offspring. Some changes are obvious and not so fun, like extra pounds, dark circles under the eyes, and so on….you moms know what I mean. Other changes aren’t so obvious, at least to outsiders.

One difference is that I’m much more comfortable with who I am. Some of that might just be a result of getting older (and hopefully wiser), but I think going through the ups and downs of motherhood and knowing everything that I’ve survived has helped me to shed some insecurities of my past. Instead of worrying so much about what people think of me and being afraid to step out into the unknown, I’m much quicker to try out new ideas and launch into untested waters.

Along those lines, I have a confidence that wasn’t there before I had children. In my pre-children days, I was a very quiet, insecure person. I was not good at meeting new people or getting outside my comfort zone. Now I sing silly songs and make crazy faces and dance like a fool because it makes my children happy. Never in my wildest dreams would I have thought years ago that I could do some of the things that I’ve done in recent years. Of course, as the Lord leads us, He equips us also, but I believe that my role as mom has served to chip away at my flesh so that the Lord could use me as He chooses.

Another thing that motherhood has done is brought a boat load of humility to me. When we find our children misbehaving in public in horrifying ways, in spite of our best parenting efforts, it brings a deep sense of humility….we see how little control we really have in this life.

Let me just give you a couple of recent examples. A few weeks back, I decided to brave Target with my four lovely offspring, all by myself. Impressive, right? Two of the kids had some gift cards to spend, and we had a couple of hours between activities. My five-year-old was missing his nap that day, which is something I don’t recommend, but we had no choice. Before we went inside, I gave the kids the usual speech about how to behave in the store….not to beg for things, etc., etc. I told the two children who didn’t have money to spend that they could each pick out a treat from the dollar section.

Well, my super cute youngest child who was missing his nap asked if he could get two items. Not wanting to cause a scene, I agreed. We proceeded to the toy aisles for the others to shop, and he spotted something expensive that he wanted even more. I refused, and he had a melt down. A real melt down. It was much too terrible to describe.

Well, I couldn’t exactly buy him a treat after such a spectacle, could I? So, we made our way back (very loudly, I might add) to the dollar section to put his treats away, and the scene got worse and worse. I had to pry the toys from his hands as he was lying on the floor screaming and crying. It was absolutely awful.

I can only imagine what the other shoppers thought of me. Probably what I USED to think of moms whose kids had melt downs in the middle of the store. Not anymore. Now I feel pity for them. Real pity and understanding and mercy and compassion. Really.

It’s humbling to have attention drawn to us when our children misbehave, isn’t it? It can bring feelings of shame and failure and regret and anger and sadness and discouragement and on and on.

Well, here’s another example, just to solidify the picture in your minds. The same youngest child as above, well, he’s a live wire, in case you were wondering. I’ve noticed that that’s a common theme with youngest children, but I digress.

Last week, I was dropping off my oldest child at the homeschool academy one morning. My youngest always likes to go in and play with the middle schoolers. They have a fun game of tag that they play before class starts, and my baby boy seems to add to the fun. That day, apparently he really added to the fun. I found out later that afternoon that he had “mooned”  the big kids. Not just once. Not just twice. Probably not just three times. Several times.

Can you say “shamed”?

Can you say “mortified”?

I quickly called all the other parents in the class and apologized profusely and told them that he was being disciplined and it would never happen again. I think most moms with boys just laugh off things like this, and thankfully that’s what the other parents did, but some moms tend to freak out about such indiscretions. Once again, I was ashamed and humiliated. How could my child do something like that, and in public?!

Shortly after I got married, a relative stranger had a “word” from the Lord for me, which has proven to be spot on through the years. He said that I was like a pebble, and the Lord would use the circumstances of my life like sandpaper, to smooth my rough edges and shape me into what He wanted me to be. Whew! The process hurts. It’s unpleasant. As much as we long for the heart-wrenching times of our lives to be over, the Lord uses those times to make us stronger in our faith and more dependent on Him. We come to understand that in our selves we are nothing and He is everything.

Yes, humility has come to me in very large doses since I’ve had children. I could tell you many more stories of humiliating happenings, and maybe I will sometime. Maybe one day I’ll even be able to laugh about them. But when I’m in the midst of them, I have to throw myself at my Heavenly Father’s feet and beg for His mercy and His wisdom. It’s hard to raise these sinful little creatures that He has given me, but when I check on them at night and they’re all sleeping peacefully, I look at their precious faces and know that it’s all worth it, every bit of it. If they are the tools that my Father chose to mold me into the image of Christ, I’ll take it. I wouldn’t trade them for the world.

“Be joyful always; pray continually; give thanks in all circumstances, for this is God’s will for you in Christ Jesus.” (1 Thessalonians 5:16 NIV)

2 Responses to What Motherhood Has Done to Me