On the day I graduated from high school, in June 1992, I remember looking out of my bedroom window and thinking to myself, “This is it. The next thing I know, I’ll be graduating from college, then getting married, raising kids, and before I know it my life will be over.” Deep thoughts for an 18-year-old, huh? But in that moment, the brevity of life really weighed on me. I realized that “life is but a vapor,” and time really does fly.

A couple of years after I graduated from college, I met my Knight in Shining Armor. I was 23 and Trevor was 27, and we were fixed up by mutual friends. We both were sick of dating the wrong people, and we both knew right off the bat that God had brought us together. We had a brief, whirlwind courtship and married exactly seven months after we met—  17 years ago today. (For more juicy details, check out my book.) 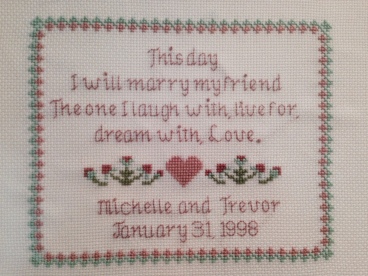 I would be lying if I told you that we rode off into the sunset and have lived happily ever after. Our first two years of married life were anything but bliss, and the next several weren’t exactly anything for the books, either (Among other things, we were digging our way out of debt and building a home ourselves. Then we added four children in rapid succession.). Our families of origin would be quick to tell you that Trevor and I are both very strong willed and opinionated, which isn’t the greatest combination sometimes, and we tend to butt heads. A lot.

The good news is that we have worked through a lot of the kinks in our relationship, and the last few years have been much better, for the most part. Of course, all marriages have “issues,” but we have matured, mellowed, and meshed through the years. We’ve learned that we each have strengths and weaknesses, and God intends for the strengths of one of us to compensate for the weaknesses of the other, and vice versa. We still butt heads and probably always will (“As iron sharpens iron, so one person sharpens another.” Proverbs 27:17), but I like to think that the conflicts help to mold and shape us more into the image of Christ than if we were doing life on our own. God has a purpose for everything, even conflict.

Trevor and I now share many goals, such as raising godly children, making a real difference in the political arena, and doing all we can to encourage and strengthen the Body of Christ.

We are learning to use the strong wills that God gave us to fight against the schemes of the devil, instead of each other. Well, most of the time. And here’s an interesting thing about our strong wills—maybe the most important thing: when we said “I do”  17 years ago, we meant it. And we’re stubborn enough to make our marriage work, no matter what. We’re sticking together through thick and thin, or “for better or worse, for richer for poorer, in sickness and in health, till death do us part.”

I have to say that the Lord knew what He was doing when He gave Trevor to me. As much as I’d like to send him to the dog house sometimes, I don’t know where I would be without him. I’m thankful that he works hard to provide for our family so I can be home to raise and educate our children. I’m grateful that he stands up publicly for The Truth, knowing that he will be criticized and attacked at times. And I’m humbled that he still loves me, even after  17 years of seeing my faults and experiencing my failures. He’s committed to the Lord, and he’s committed to me, to us.

Trevor tells me that I’m spoiled, and maybe I am. But he is, too. And that’s okay, right? I’d like for us to take the next  17 years and figure out how to spoil each other even more.

Here’s a poem that my precious sister wrote for my wedding day. It still brings tears to my eyes….. 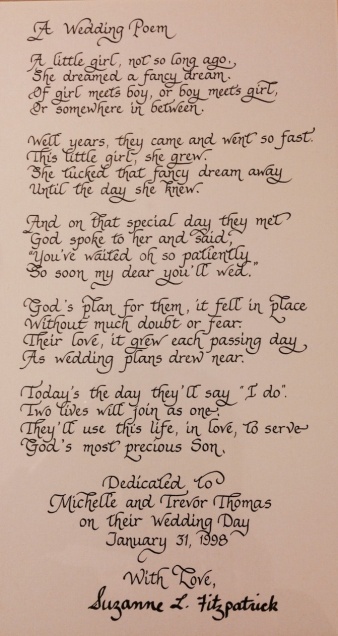 We’re in it for the long haul, and that’s a really good thing. Happy Anniversary, Sweetie. 🙂 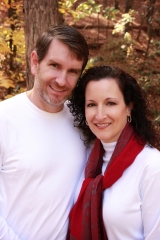